Many charter boat captains and their crews consider that the Marlin is the very highest of prizes. Recently, Stuart Florida Marlin Fishing rose to the occasion aboard The Valentine with Captain D. Cobb. 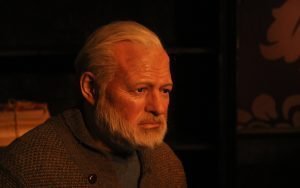 The legend of the Marlin was immortalized by Ernest Hemingway in his last major work, “The Old Man and the Sea.” Hemingway tells the story of an older Cuban fisherman, named Santiago, who has fallen on hard, unlucky times. Hoping to break up this streak, Santiago takes a bit of a chance and ventures far off-shore in search of the prized Marlin. In the end, he overcomes fear, weakness, sharks, and the unyielding sea to return to shore successful. Fish in tow.

We may not tell the tale as well as Hemingway, but recently D. Cobb was able to hook up his angler, Doug Shingary of Stuart, with what turned out to be an estimated 250 pound Blue Marlin. The Valentine was in about 85 feet of water due east of the St. Lucie Inlet when the Marlin hit a threadfin herring. Forty five minutes or so later, our angler succeeded in catching and releasing the fish of a lifetime.

Again, we cannot write like Papa Hemingway, and Captain D. Cobb is way too young to really be The Old Man and the Sea, but you can come fish with us for the chance to catch and release a fish to remember.

Please click here for more information on a trip. LIFE IS SHORT….FISH HARD!

About the Author: John Valentine