This post, Gulf Stream Fishing 2019, is the third in a series on fishing the legendary Gulf Stream. Let’s recap a bit from the two previous posts.

In quick summary , the Gulf Stream is a current that moves South to North along the East Coast of the United States. Again in summation, the Stream is moving along at about 4 MPH at the surface and pushing a wide variety of smaller fish into the hungry mouths of larger fish. It has been a source of keen human interest for centuries. Take a look above at the Benjamin Franklin map version. 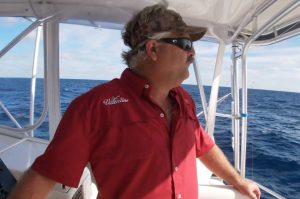 Captain D. Cobb of The Valentine

The Stream is also warm. “It is a highway of heat transport,” said  Ellen Prager, formerly of the Rosenstiel School of Marine and Atmospheric Science in Miami. So you can now visualize this “river” moving north and is both faster and warmer than the water around it. Continue your visualization by considering that the edges of this current form a “fence” of sorts.

Not only do fish like Sailfish, Mahi, and Wahoo feed into the Stream, they also work East to West across it and over that “fence.” What can help the angler on the hunt is a time honored method of finding the big boys whether they are on the East/West or North/South feeding path. Very simply: Birds, Weed and Debris.

This idea of  can easily fill a book all by itself, much less a blog post. So let’s get a quick visual. The Stream pushes along weed lines and also debris, such as wooden pallets that have fallen off a commercial vessel. Underneath this weed and debris are baitfish seeking shelter and also eating the tiny sources of nourishment in the weeds. 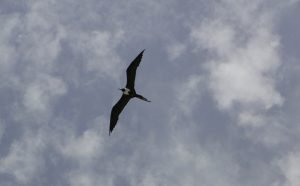 Circling above, and easily observable from a distance, are birds like the Frigate shown above.  They know that they can swoop down on the small schooling fish for an easy meal. The big predator fish know this also. You now get an idea where this is going. Put your boat on top on the weed and debris line and underneath the birds. Throw some live baits along the edges and even in the middle of that and hang on.

OK, we have over-simplified Gulf Stream Fishing 2019 just a bit. So why not let us put you on the fish. Please click here for more information on a trip. LIFE IS SHORT….FISH HARD!  Thanks for reading.

About the Author: Joey Valentine